How do Solar Panels Work? Your Complete Guide to Solar PV

By Christine HannivanSeptember 22, 2022No Comments 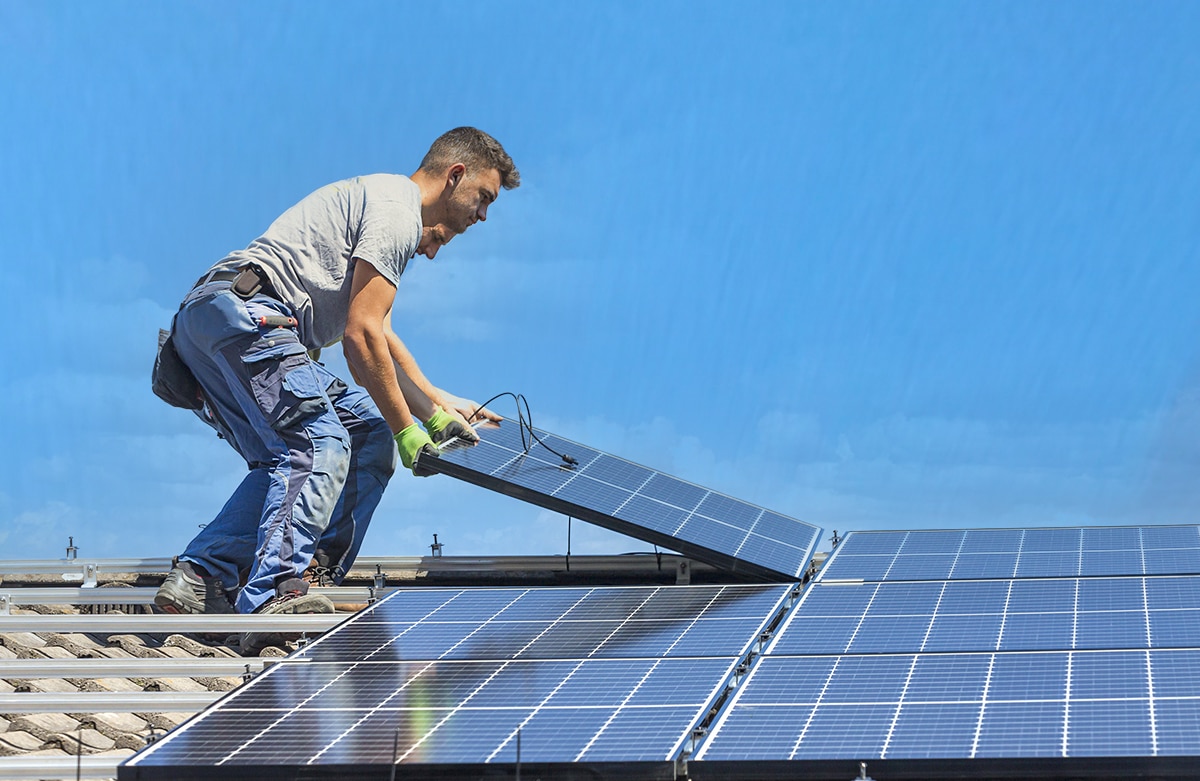 Solar panel prices have decreased while the technology has simultaneously improved. Solar PV is becoming an attractive option for many homeowners worldwide looking to lower their electricity bills and reduce their dependence on “dirty” forms of power.

Harnessed from the sun’s rays, solar energy can be used to heat, cool, and light homes and businesses. This happens when photons from the sun shine onto photovoltaic material and agitate electrons, creating a flow of energy that can be converted and used for anything that requires electricity to run.

The process of converting sunlight into electrical energy is called the Photovoltaic Effect, and it occurs in what is called a photovoltaic cell. In solar PV panels, photovoltaic cells are composed of semiconductors with p-types and n-types (positive and negative) joined together to create an electric field and transfer energy through the panel harvested for use.

These materials work because they have a high level of photoconductivity, which is the term we use to describe how well a material can absorb energy when exposed to light and convert those photons into free electrons. Silicon, for example, has a layer of silicon dioxide that is capable of doing this efficiently.

There is also a lot of research lately on using other materials in solar panel manufacturing that would mimic the process of photosynthesis like plants use, to agitate special dyes in these solar cells to produce electrons. While this technology is still in its infancy, it has the potential to be a low-cost and highly efficient method of generating electricity in the future.

Components of a Solar System

You can’t just buy a few solar panels, throw them up on a roof and expect them to generate usable energy for your home. Solar systems have multiple components that work together to get that power from the sun, convert it into electricity, send it where it needs to go, and monitor its health. Here are all the necessary components of a solar PV system.

Solar panels are made of groups of solar cells connected with wires and protected with glass, a back sheet, a metal frame, and an insulating layer. There are three types of solar panels on the market today:

Polycrystalline panels are made by melting together shards of silicon into ingots and forming them into individual solar cells that are either positively or negatively charged and connected together into solar panels.

Since building these panels is easier, poly panels are often cheaper than their mono counterparts, but they are also less efficient. You can recognize these panels by their flecked blue shade.

Monocrystalline solar cells are cut from one piece of silicon and then connected to form solar panels in the same way poly cells are. The process of building monocrystalline cells is a bit more complex, which is why these panels will cost a little more, but the payoff is that they are more efficient than poly panels, making the price worth the investment.

Mono panels are easily recognized by their sleek black look. Many people will choose these panels for their solar projects for higher efficiency and better curb appeal.

Amorphous or “thin-film” panels are made differently than both mono and poly versions because instead of building solar cells out of ingots or slices of silicon, they are made by depositing a thin layer of silicon directly on a glass substrate. This creates an extremely thin panel, almost 100 times thinner than polysilicon.

Of the three main types of PV panels, amorphous panels are the least efficient but also the most cost-effective of the bunch.

Solar panels must be wired together to work as a unit, and that unit must be fixed to the roof or ground to ensure it stays where it needs to be. This is achieved by racking systems to mount and affix your panels to a surface.

Roof-mounted systems are the most common type of solar configuration you’ll find, simply because not everyone has the space to mount an entire PV system in their backyard or on their lawn.

Ground-mounted systems are used for large commercial operations, solar farms, and large private properties. They can be fixed in place or installed on solar tracking mechanisms that “follow” the sun, allowing for the most electricity generation throughout the day.

Inverters are used to convert the direct current (DC) power generated through your solar panels into usable alternating current (AC) power. Without an inverter, a solar PV system is useless at powering anything in your home.

Most solar systems installed today will include some sort of monitoring technology that allows homeowners and solar professionals to view and monitor the production and overall health of the system.

Usually included with the inverter, homeowners can access data about their systems on an app or other smart device, and solar contractors can also pull up this information when troubleshooting issues with the system.

How are Solar Panels Made?

Solar panels are made by first making crystallized silicon rocks by heating sand at a high enough temperature to melt it into cylindrical ingots and positively charged with boron.

These ingots are then sliced into thin disks called silicon wafers, polished, and built into individual solar cells with an anti-reflective coating applied to them since silicon in this state is very reflective.

Once you have enough solar cells to build a solar panel, they can be soldered together into a grid pattern and coated in phosphorus gas to negatively charge them and stimulate the flow of electricity through the module in combination with the boron charge.

Glass then forms the outer layer of the panel to protect it from the elements, and the backing and the metal frame are installed. Once the panel is built, it is tested to ensure that everything is working as it should, it’s cleaned, and packed for shipment.

How do Solar Panels Work?

As we mentioned earlier, solar cells generate power through the imbalance between the p-type and n-type silicon wafers. When photons from sunlight hit these cells, the electrons bounce around and try to balance out the positive and negative cells since p-type components have one less electron than n-type. This creates the Photovoltaic Effect and is what generates electricity.

How the Components of a Solar System Work Together

Solar panels won’t always produce a constant amount of power, depending on several factors. Here are the two most common factors that affect solar power production.

While solar panels will still work on snowy or cloudy days, their output will decrease in any condition that isn’t full, direct sun exposure. The amount of energy from the sun that hits the system during the day also depends on the angle of the panels and the sun’s position in the sky, which fluctuates daily and yearly. For example, people living in the Northern Hemisphere, far from the equator, will notice less power output in the Fall and Winter months.

Temporary but regular shading from the shadow of a nearby tree passing over the individual panels, especially if they are wired in series, will affect the system’s overall output.

Ambient temperature also plays a role in how much electricity flows through the system at any given time. Solar panels perform at peak efficiency between 59°F and 95°F, with hotter or colder conditions causing efficiency to decline. This is why it’s important to choose a panel rated to work well in the weather conditions that the region in which you live experiences regularly.

What Happens When Solar Panels Generate more or Less Energy Than Needed?

Most solar power users will experience certain times when they’re generating more or less renewable energy than they need. Here are a few solutions in place to combat that problem.

Unless you plan to go fully off-grid, all other solar systems are still connected to the local power grid. One of the benefits of a grid-tied system is that your home still draws power from the grid when your solar panels aren’t producing enough power or when they aren’t producing anything overnight.

Another benefit to having a grid-tied system is participating in the net metering programs offered in most states. You can sell the excess power generated by a solar system back to the power company for a discount or credits off of your electricity bill. Rates for these net metering programs are usually quite competitive and are a great way to incentivize homeowners to go solar.

Storing excess solar energy in a battery is a great way to access solar power when the sun isn’t shining or the grid goes down. While solar storage options are still quite pricey, many people choose to install batteries alongside their solar systems to reduce their dependence on the electrical grid for peace of mind and energy independence.

PV technology improves every day, but the basic concepts remain the same. With lower prices and increases in efficiency year after year, understanding the basic concepts of how solar panels work is the first step to getting involved in this ever-changing and fast-paced industry.